Save $10 On Our Tinnitus Sound Therapy Systems Models BST-80-20T and S-680-02. Use Coupon Code STAYWELL23. Offer expires Jan 31st, 2023 @ 11:59 pm EST. Cannot be combined with other discounts. Not valid on prior purchases. Free Shipping in the Continental U.S.A.
Home  /  Sleep Sound Therapy System   /   How Sound Oasis and Sound Therapy Can Help Your Tinnitus, by Lily McCann

Tinnitus is categorised as the perception of sound for which there is no actual external source. Occurances can vary, with ringing, buzzing, clicking, hissing and whistling noises being amongst the most commonly heard. It can be persistent or brief and can occur in one ear or both. For sufferers, tinnitus can be life altering, especially if left untreated, often leading to complications including anxiety, a lack of sleep and even depression. 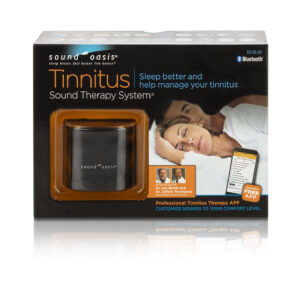 According to statistics from the American Tinnitus Association, over 12 million people suffer from tinnitus in the United States alone. It is an increasingly common medical problem and is also the number one disability amongst U.S. war veterans. Although there is currently no medical cure, there are a number of treatments available to make the condition more manageable and Sound Oasis can help with their range of tinnitus masking products.

Tinnitus is a condition with a wide range of causes, including prolonged exposure to loud noises, damage to the brain, wax build-ups, infections in the ear and as a side-effect of certain prescription medications, including aspirin. In fact, in excess of 200 medications are known to potentially cause tinnitus. It is, therefore, quite common amongst those who work in loud environments and amongst those who have engaged in prescription drug abuse. Tinnitus primarily affects people over the age of 55, although it is becoming increasingly common amongst young people.

The most frequent cause of tinnitus is hearing loss caused by exposure to loud or persistent noises. Most instances of tinnitus are subjective, meaning that the sound cannot be perceived by anyone other than the sufferer. However, some cases of tinnitus are objective, with the sound being identifiable by a physician. This is most commonly the result of noises related to blood flow, or muscular spasms.

If the tinnitus is only experienced in one ear, medical advice should be sought immediately, as this can potentially be a sign of acoustic neuroma; a tumour which grows around the nerve which connects the ear to the brain.

Chronic tinnitus can severely affect a sufferer’s quality of life. The perceived noise itself can often lead to difficulty sleeping, with insomnia being by far the most widely reported effect of the condition. Often, sufferers find that the problem is most noticeable when trying to sleep, as they are in quiet surroundings, away from other background noises and distractions.

Tinnitus can also severely impair the hearing process, potentially leading to a loss of hearing or difficulty concentrating on another person’s speech.

Psychological problems are also fairly common, with many sufferers developing anxiety disorders and even depression, largely as a result of the burden of living with the condition, the lack of sleep and the inability to cope with the constant nuisance. Tinnitus, if left untreated, can be extremely stressful and disturbing. In extreme cases, tinnitus has even led to suicide, although this is rare.

As there is no cure for the condition, treatment revolves around making the problem more easily manageable. Hearing aids are often given in order to treat the hearing loss associated with the condition, while some medications, like Sonarx, can ease the tinnitus symptoms. Many sufferers undergo counselling, which can help them to cope with their tinnitus symptoms and learn distraction techniques, in order to minimalise the psychological impact of the condition.

However, the most common treatment method utilised is sound masking, which serves to improve sleep. In order to do this, sound masking involves making tinnitus less noticeable by drowning it out with other background noises. The sounds played are designed to obtain the perfect balance between being distracting enough to mask tinnitus, yet not distracting enough to impact upon sleep.

In addition, Sound Oasis have a wide range of sleep sound therapy systems, suitable for various different needs. These systems have provided proven relief for tinnitus sufferers, effectively helping them to get to sleep more easily and sleep more peacefully through the night.